HappyMod is an application for ROOT users that allows the modification of the apps to obtain advantages that are not allowed by the developers; Also known as a tool to download mods already applied. Due to the illegal implications of the aforementioned HappyMod, this app will never be available on Google Play. Even so, the official Android store constantly receives a multitude of applications posing as HappyMod.

The Google Play catalog is so huge that it would take several lifetimes to download all the applications; and several more lives to test all those applications thoroughly. Although, if this catalog is analyzed, the number of members is greatly reduced since cleaning does not prevail excessively. For example, all you have to do is search for a popular game to discover dozens of applications trying to impersonate it. And the same thing happens with apps, especially with those that cannot be officially found on Google Play. HappyMod is a good sample.

Do not search for HappyMod on Google Play: it does not exist and will never exist

The mechanics of most apps are the same: fake icons, screenshots that don’t match, and ads everywhere

HappyMod is a service that violates several points of the Google Play developer policy. In essence, it is an app that illegally modifies other applications or provides already modified apps. Unblocking app purchases without having paid for them, activating achievements without getting them or downloading modified apps without the consent of their developers, HappyMod is a risk for Android, its devices and its users.

We have already made it clear: do not search for HappyMod on Google Play because you will not find it. Or maybe you can’t find the real application, because you are going to find fake clones. A simple search is enough to discover HappyMod guides, tricks and related information, but always without real utility for those who have made the search. Of course, all the clones use the HappyMod icon, they usually include screenshots that do not correspond to what they really offer and also the texts of the Google Play file confuse those who enter looking for the mods app.

We usually follow all the new apps that are published in the store ( in AppBrain they have an updated count). And there is not a week in which several applications do not appear posing as HappyMod, all with the same mode of action: they imitate the icons, screenshots and descriptions of the original tools, always with the intention of filling anyone who downloads the applications with advertisements; with the risk of giving excessive permissions and even of endangering the phone by malware. 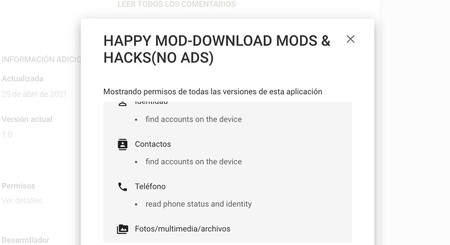 Why does a fake HappyMod app need all these permissions?

We are surprised that Google is not more restrictive with this type of action (little by little it is redeeming itself ), especially since the company itself specifies this bad practice in its Google Play policies ( identity theft ): ” We do not admit applications that deceive users impersonating someone (for example, another developer, company or entity) or another application“. Just search for ‘HappyMod’ on Google Play to discover how little that rule is respected. With the huge potential risk for Android users.

The original HappyMod is a delicate application that requires ROOT and most of the time it is useless when modifying other apps: most of them are protected against modification attacks.

Our recommendation is that you avoid as much as possible any relationship with HappyMod and its modifications: not only is there the danger that you will download a fake app, you can also be infected with malicious software. Whether you want to modify your applications with the original HappyMod or if you want to access the download of the modifications already made.