Many people think that the important nutrient iron can only be found in meat. It is understandable that they then believe that vegetarians are not eating enough of them and are pale, tired and limp as a result. But that’s not true, because there are also many vegetable sources of iron.

According to the World Health Organization (WHO), iron deficiency is the most common nutritional deficiency in the world. So it meets everyone – not just vegetarians and vegans. For adults, the following applies: men should consume 10 milligrams of iron daily, for women it is 15 milligrams.

It is all the more important to get enough iron from food. However, it is not only important how much iron a food contains, but how well it is available to the body. The divalent iron (Fe2 +) occurs mainly in meat and fish and is 10 to 20 percent absorbed. The body only absorbs 1 to 5 percent of the trivalent iron (Fe3 +), which is mainly found in plants.

However, you can improve absorption by doing the following:

There are considerable amounts of iron in these plant-based foods:

Pumpkin seeds contain 12.5 milligrams of iron per 100 grams, meaning that just a handful of pumpkin seeds cover the daily requirement of this important trace element.

You can also get pumpkin seeds from German organic cultivation. The protein-rich snack is perfect for nibbling between meals. AHO German pumpkin seeds are a tasty topping over muesli, yoghurt, salad or soup . Or you can try the seeds as a delicious pesto made from pumpkin seeds, lemon and basil. When shopping, you can use pumpkin seed bread and rolls more often.

The pseudo-grain amaranth (does not contain gluten) scores with 9 milligrams of iron per 100 grams. Amaranth is not only a good source of vegetable protein, the high calcium content also makes amaranth particularly valuable for vegetarians and vegans.

Amaranth is perfect for bread, rolls, cakes and cookies. Popped amaranth tastes good in muesli or porridge. Specific preparation tips can be found in our recipe gallery for amaranth.

8.2 milligrams of iron per 100 grams – flaxseed is one of the best sources of iron. Another plus point: the small seeds keep you full for a long time due to their high fiber content.

Flax seeds are a natural swelling agent and can therefore also be used in baking.

Quinoa is very popular right now – and rightly so! Vegetarians and vegans in particular should occasionally use rice instead of rice, as it contains 8 milligrams of iron per 100 grams.

The pseudo-grain quinoa is not only a good vegetable source of iron, but also suitable for a gluten-free diet, as it does not contain any gluten.

Lentils are better than their reputation. In addition to plenty of iron (8 milligrams per 100 grams), the small legumes also contain a lot of protein and a lot of fiber. In addition, as a vegetable source of protein, lentils have hardly any fat, unlike meat.

With 15 grams of protein per 100 grams of pistachios, the small kernels are particularly suitable for preparing protein-containing meals. A high protein diet helps to boost your metabolism and prevent cravings.

5.2 milligrams of iron per 100 grams – pine nuts also score with a decent iron content. Thanks to their fine, nutty taste, pine nuts are very versatile.

Whether in muesli or bread – vegetarians and vegans should definitely have oatmeal on their menu. Because these contain 4.6 milligrams of iron per 100 grams. Combine this with citrus fruits to increase the iron absorption in the body.

You can also prepare oat flakes as overnight oats – so you always have your vegetable protein source ready, you can prepare larger quantities and enjoy them on the go.

In the case of apricots, the dried variant is the better – at least when it comes to iron content. Because dried apricots score with 4.4 milligrams of iron per 100 grams.

When shopping for dried apricots, you should make sure that they do not contain harmful preservatives or other chemical additives. A strong orange color of the vegetable iron source when dried mostly indicates that it has been preserved by unhealthy sulfur compounds.

For a long time spinach was considered a veritable iron bomb – until it turned out that the iron content was incorrectly calculated. But even with the “correct” information (4.1 milligrams per 100 grams), Popeye’s favorite vegetable makes it onto this list.

Since spinach is also rich in vitamin C, this vegetable source of iron has a natural accelerator for the absorption of iron. 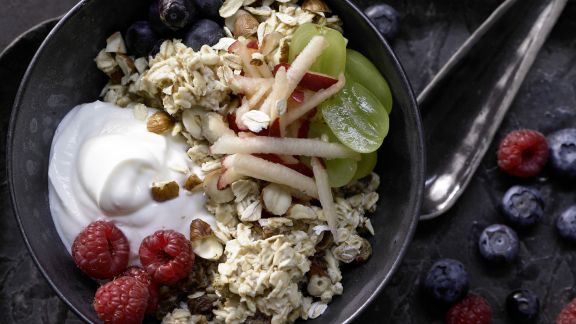 Knowledge to take away

Iron supplies our body with oxygen and is therefore an indispensable nutrient. The body’s iron absorption depends on the need: the higher the need (for example during pregnancy), the more iron is absorbed.

Foods rich in vitamin C promote iron absorption in the body, while coffee, tea, phylates, and milk and egg products inhibit absorption. Although animal protein is absorbed more quickly by the body, vegetable sources of iron can also support the body in iron absorption.